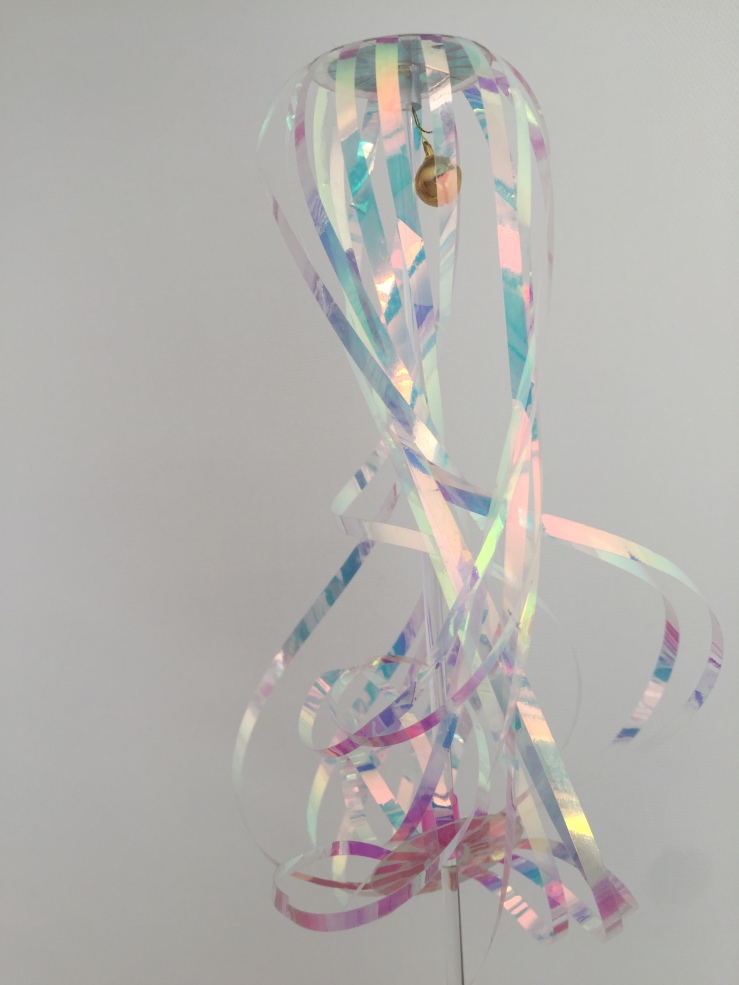 This morning when I was roaming around the house to find today’s item for the memory archive, my partner pointed out this tangled rainbow stick. Its temporary home was a jar in our kitchen which is holding a random collection of, currently, homeless items. It never crossed my mind to dispose of the stick; it’s beautiful. His reasoning was that he is constantly asked by the kids to detangle the stick. It’s a sisyphean task as less than a minute of playing with it, the kids always manage to get it all tangled up again and the fiddly work starts all over again.

When I picked up the stick today, I had a closer look and noticed for the first time a sticker at the top which read World Rainbow Stick Association. As this sounds quite serious I tried to look it up online, however, I couldn’t really find an official website.

The memory attached to the stick is that of our visit to the island Teshima, which is known to art lovers because of  the Teshima Art Museum. Visiting Teshima was part of a 5-day holiday to the art island Naoshima, situated in the Seto Inland Sea. We were lucky when we went as the Setouchi Triennale happened to be on at the same time. This meant there was a lot of extra artwork displayed across the participating islands and a much more frequent bus and ferry timetable on offer. It was late October and still t-shirt weather. For exploring Naoshima we rented bicyles with kids seats; a highly recommended way to get around. On Teshima, however, we weren’t sure where to rent bikes from so we got around the island by bus. At the end of a long day, the busses didn’t run as frequently so we decided to walk back to the ferry terminal. We had underestimated the distance as well as the heat of the late afternoon sun and our daughter wasn’t too happy about the walk. We were therefore excited to walk past a little café, nothing more than a wooden shack that had a street vendor selling homemade lemonade as well as rainbow sticks. To cheer up our daughter she got one which saved the remaining walk.

Thinking about the story of the stick again, which evoked memories of our most-enjoyable trip within Japan so far, I decided to put it in storage rather than getting rid of it. I’ll give it back to my daughter when she’s a bit older and will then ask her whether she remembers the long walk on Teshima island.