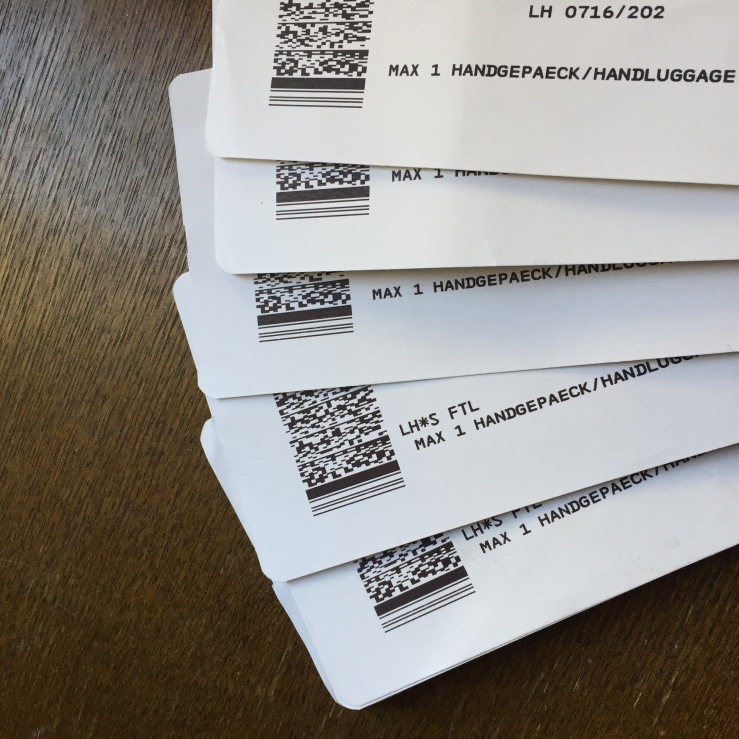 Happy New Year! It’s been, again, a long time since I’ve last written, making one of my new year’s resolutions the resurrection of this blog. We’ve only just come back from Europe where we spent some quality time with friends and family. Discarding our return flight boarding passes and luggage tags, which were piled up on the entrance cabinet, made me remember that I used to keep all those things as a teenager, when flying somewhere was still a novelty for me. Back then I was clinging on to every little item that was connected to the memory of a holiday, filling many boxes that I opened less and less over the years, and which I eventually ended up losing when moving countries.

So what is the memory in regards to the passes I took a photo of for the archive today? It’s a little anecdote I wanted to write down here, something about our arrival back in Japan this time.

We were in a taxi, on our way home from the airport. As usual, the driver was an extremely polite and calm Japanese, wearing white gloves and taking his job very seriously. We were only a few blocks away from our place when we heard the siren of a police car. When I spotted it, I pointed it out to my son who is still at this age where police cars are a major thing. “Oh, look, the police car has turned into our street”, I said to my son, “I wonder where it’s going!”. By then we had arrived and the driver pulled into our parking lot. We had just thanked the driver and unbuckled, when we noticed that four policemen and women were standing next to the car. The police car we had seen had been following us the whole time. They had parked in an instant just after passing our house and, without saying a word, had run (in silence) over to our cab. None of them said a word and our driver, who must have given them a non-verbal signal that he is aware of them, patiently and silently conducted the payment process with us before eventually opening the car door and talking to the police in a very calm manner.

We think the matter was that shortly before arriving at our place, when leaving the main road, the driver must have overlooked a signal. We don’t know for sure as we were completely excluded from this situation and it also doesn’t really matter. The reason I am writing this down is that, again, it astonishes me how a situation like this is dealt with in Japan. I am pretty sure that in Europe, or other places in the world, there would have been at least some shouting or heated discussion.

However, here, even though it was all happening right in front of our eyes, both parties dealt with it so discreetly that hadn’t there been the siren, you would have nether thought there was an issue.

Welcome back to Japan, I thought happily.